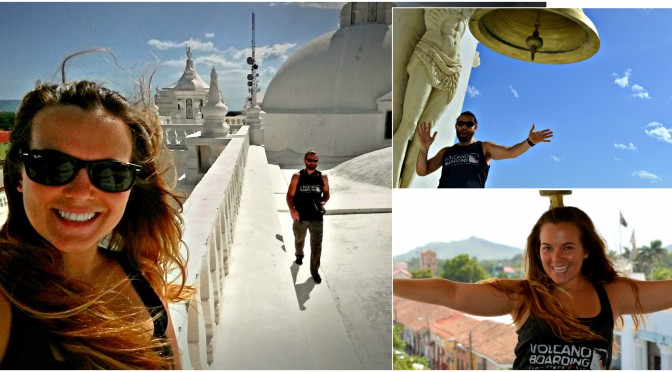 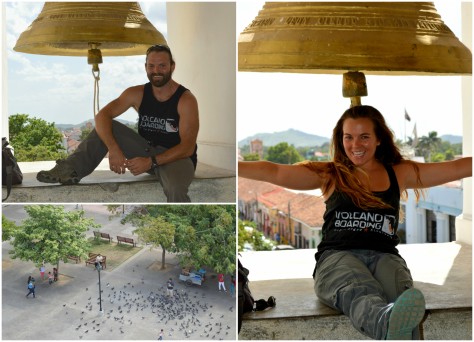 We arrived in Leon, Nicaragua with very little expectations other than our friends said it would be hot.  The heat here was no joke, it was diffilcult to move between the hours of 10:30am and 4pm.  We found a cheapish hostel to stay at and parked The Globe Trol on the street right in front of the hostel.  Christian tipped the security guard of the hostel to look over The Globe Trol for the night.  The next morning Christian found our van-haus keyed all over the two sides that the guard couldn’t see.  That’s the risk when we visit a city and park on the street.

After our nine hour drive the day before from El Salvador and two border crossings we slept-in until the room turned into a sauna.  We slowly made our way towards the central park plaza for some touristic photos.   At certain times during the day you can walk on the roof of the Catedral de Leon for $3 per person in your socks.

Our next stop was Granada a few hours south of Leon, this was a colorful colonial city that we only spent the afternoon at while on our way to Ometepe Island, Nicaragua.

I really love me some butterflies so when Christian found out that just outside of Granada there was a tiny butterfly sancturary it was on our Must Do List.  It’s doesn’t fill the gap on my bucket list where the Monarch Sanctuary in Mexico was, but I couldn’t say no to a tent full of giant colorful butterflies.

Or help with some gas

Where in the World...

To the end of the Americas

Trip from Alaska to PatagoniaJanuary 25th, 2017
We will have been on the road in The Globe Trol for over a year. Our goal is to make it to Ushuaia, Argentina at the end of the world in one year.